As I mentioned in a previous post, my gaming group found that CROM needed a bit more for us, especially if it was going to get some replay. The core mechanics of the game are solid enough, but the trouble we had was that other than a character's dice pool and miniature, there wasn't much to set one apart from the other. All 12 Dice characters would essentially be the same figure. To combat this we started looking into alternatives.
One thought I had was for a collection of Heroic Abilities that would be put on cards and selected by players when creating their heroes. These could be used for long-term play or for one-offs or ignored for simpler games. I am still working out how to allocate cards but the working formula is something along the lines of 1 card for every 4 dice in the character's pool, rounded down. Using this formula, more powerful characters will get more abilities to distinguish them. For example - Conan has 12 dice in his pool, allowing him a selection of three Heroic Ability cards while Red Sonja (10 Dice) and Subotai (10 Dice) would each receive only two cards (10/4 = 2.5. rounded down to 2).
As I am working on the Heroic Abilities, the majority of them fall into the combat categories. Mostly, this is because the majority of the game comes down to either Attack or Defense rolls. There are some movement abilities in the works, but movement is pretty straight forward with modifications for climbing, jumping and terrain. What there are very few of are cards that tap into the use of Special dice. This is very much due to the near total absence of good examples of Special actions in CROM. Magic falls under this category, but so far that is touched on only briefly concerning summoning and controlling creatures.
I've included a brief list of some of the Heroic Abilities I am considering for the game. Some of the modifiers tap into rules created either by myself or borrowed from Spacejacker's ground work which I happily borrowed (Thanks for the good work dude!). These may change as I play test them and in some cases there may seem to be similarities between abilities that are not so clear unless you have read the dice mechanics of this game.
MIGHTY FOE (Attack) +1d6 to attack rolls in melee
FOE CLEAVER (Attack) +1 automatic 6 to attack rolls in melee
CLEVER FIGHTER (Defense) +1d6 to defense rolls in melee
STALWART (Defense) +1 automatic 6 to defense rolls in melee
SWEEPING ATTACK (Attack) Attack two adjacent opponents in melee with one attack roll
FISTS OF STEEL (Attack) Unarmed attacks are made at no penalty
KEEN EYED (Attack) +1d6 to attack ranged attack rolls
DEAD SHOT (Attack) +1 automatic 6 to ranged attacks
TRICK SHOOTING (Attack) The hero does not require line of site to shoot at target. Cannot shoot through solid walls or obstacles but can shoot around corners and over linear obstacles.
BATTLE RAGER (Attack) If the hero slays an opponent in melee combat, he may do an automatic follow-up attack on a second opponent within 4 inches.
QUICK DEFENSE (Defense) Attackers do not get bonuses for multiple attackers
SHIELD BASHER (Attack) Can use shield as a second weapon for dual wielding bonus.
MISSILE DEFLECTION (Defense) +1d6 when defending against missile attacks.
HEROIC LEAP (Movement) +1d6 when rolling for jump moves
UNTOUCHABLE (Defense) +1d6 to all defense rolls
BATTLE CRY (Attack) -1d6 to opponent’s defense roll
UNFLINCHING (Defense) Attacks against this hero inflict 1 less hit.

In the above examples, you will notice each Heroic Ability name is followed by a parenthetical notation. This is not just an organizational notation, but I plan to use it to limit Heroic Abilities. I haven't decided how exactly, but it seemed a good up front measure to categorize the abilities by what dice pool they are designed to modify. One possible way to limit the use of these cards will be to place a cap on how many of one type of card a hero may have.
Lastly, I have also worked on a card layout for these cards. I picked a new piece of artwork to go on the card backs to set them apart from the existing cards which are used in the iinitiative deck. These cards will be held by the player using them. 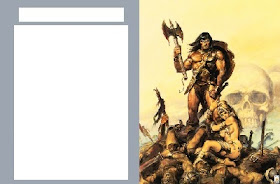 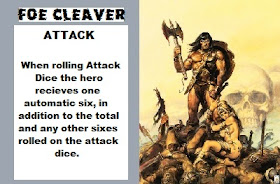 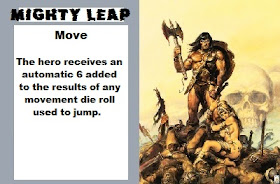 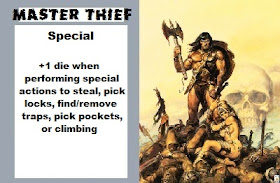